Sulfur is the chemical element in the periodic table with symbol S (from Latin sulfur) and atomic number 16. It is a non-metal, odorless and test less, very abundant; its most known and common form is the crystalline one, bright yellow colored; it is present as sulfides and sulfates in many minerals and it is often pure in regions with active volcanoes.
It is an essential element for all the living beings, where it is present under the form of amino acid; consequently in almost all the proteins. In the industrial field it is overall used to obtain fertilizers, but gunpowder too, laxatives, fungicides, insecticides.
This element is pale yellow colored, soft, light; it has a characteristic odor when tied to hydrogen (odor of putrid eggs: it is important to notice that this odor is not the characteristic one of the sulfur, which is odorless, but it is the one of the hydrogen sulfide H2S).
Sulfur is burning with bluish flame which is emitting a suffocating and characteristic odor due to
Sulfur dioxide (SO2) and trioxide (SO3) formed by the combustion.

Sulfur is insoluble in water but soluble in carbon disulfide. The states of oxidation or most common valences are -2, +2, +4, +6. In all the three states, solid liquid and gaseous, sulfur is showing three allotropic forms, whose interactions are not yet completely clarified. The atoms of the crystalline sulfur are gathered in 8 atoms rings, S8; such structure, named cyclo – octa- sulfur, is represented as two letters W put side by side, unified at the extremities where the sulfur atoms occupy the vertexes of the W.
The first crystalline form is rhombic: the element has a rhombic or octahedral crystalline structure and shows its characteristic yellow color; it is opaque and fragile. It is possible to prepare this form through crystallization from a solution of sulfur in carbon disulfide (CS2). It is stable below 96 °C.
The second form is monocline; the crystal are needle shaped, waxed and fragile, always yellow colored. The monocline sulfur can be prepared through crystallization from molten sulfur and is steady between 96 °C and 119 °C.
The third form is amorphous: there are no crystals. In this state sulfur is hard, dark and elastic. This state is obtained through rapid cooling down of the molten sulfur and is unsteady, turning slowly into crystalline rhombic sulfur; the X rays crystallography shows that such amorphous form could be helicoidally form with 8 atoms each turn. The colloidal form and sulfur flowers are amorphous forms too which slowly crystallize, although these two forms consist in mixtures of rhombic crystals and amorphous sulfur.

Sulfur is used in many industrial processes among which the most important is the production of sulfuric acid (H2SO4) for batteries and detergents and for the production of sulfurous acid (H2SO3) too; other processes are the production of gunpowder and the vulcanization of rubber. It is used also as fungicide and in the manufacturing of base phosphate fertilizers. The sulfites are used to whiten papers and as preservatives of dry fruit; other uses are in the heads of matches and in the fireworks. The sodium or ammonium thiosulfate is used in photography to fix the photographic prints. The so called “magnesia”, a magnesium hydrate sulfate, is used as laxative, as exfoliating and in the gardening as specific fertilizer for poor of magnesium soils.

A curious application is the one of sulfur sticks in the Ligurian popular medicine to look for the point in which the back is tense or tight.
Sulfur is settled also in the volcanic areas where the solfataras are getting out: jets of sulfide acid (H2S) which is the aqueous solution of hydrogen sulfide.
Sulfur can produce salts as copper (II) sulfate (CuSO4) useful in agriculture which can oxidize some reductive elements as iron (Fe) and zinc (Zn) or can be heated with copper sulfate to obtain copper (II) sulfide (CuS).

The two essential protein producing amino acids, cystein and methionine (as well as homocysteine and taurine) contain sulfur and some very common enzymes too; this fact makes the sulfur an indispensable element for the life of any cell. The sulfide chemical bridges among polypeptides are extremely important for the assembling and structuring of proteins.
Some types of bacteria use hydrogen sulfide (or sulfide acid in aqueous solution, H2S) instead of water as donor of electrons in a primitive photo synthetic process. Sulfur is absorbed by the plants as sulfate ion. The inorganic sulfur is forming Fe-S aggregates and, always belonging to sulfur is the link-bridge positioned CuA of the cytochrome c oxidase. The great quantities of carbon, burnt in the industries and in the electric centrals, input a lot of sulfur dioxide, daily into the atmosphere, which reacts with the oxygen and aqueous vapor in the air to produce sulfuric acid. This strong acid falls down to the ground together with precipitations forming the famous acid rain falls which acidify the land and water resources causing severe damages to the natural environment of many industrialized regions.
The sulfur (Sanskrit, sulvere; Latin, sulfur) was already known to the ancient populations and is mentioned in the biblical history of Genesis. The English translation refers to sulfur as brimstone, the stone of the brim because it is easily found in the brim of the craters of volcanoes. The term sulfur derives almost certainly from Arabic “sufra” which means yellow; the Sanskrit term sulvere is probably a loan. Homer mentioned sulfur in the 9th century B.C. and in the 424 B.C. a tribe of riders destroyed the walls of a city using a mixture of sulfur, carbon and tar at the foot of those wall. In the 12nd century the Chinese invented the gunpowder which is a mixture of Potassium Nitrate (KNO3), carbon and sulfur. The first Alchemists gave the sulfur its alchemist symbol: a triangle above a cross; through their experiments they discovered that the mercury could be combined to sulfur. At the end of the decade 1770 Antoine Lavoisier definitively convinced the scientific community that sulfur was an element and not a compound.
The extraction of sulfur started in Sicily from the beginning of the 17th century and rapidly evolved till reaching the level of 378.000 tons equal to 4/5 of world production (1). 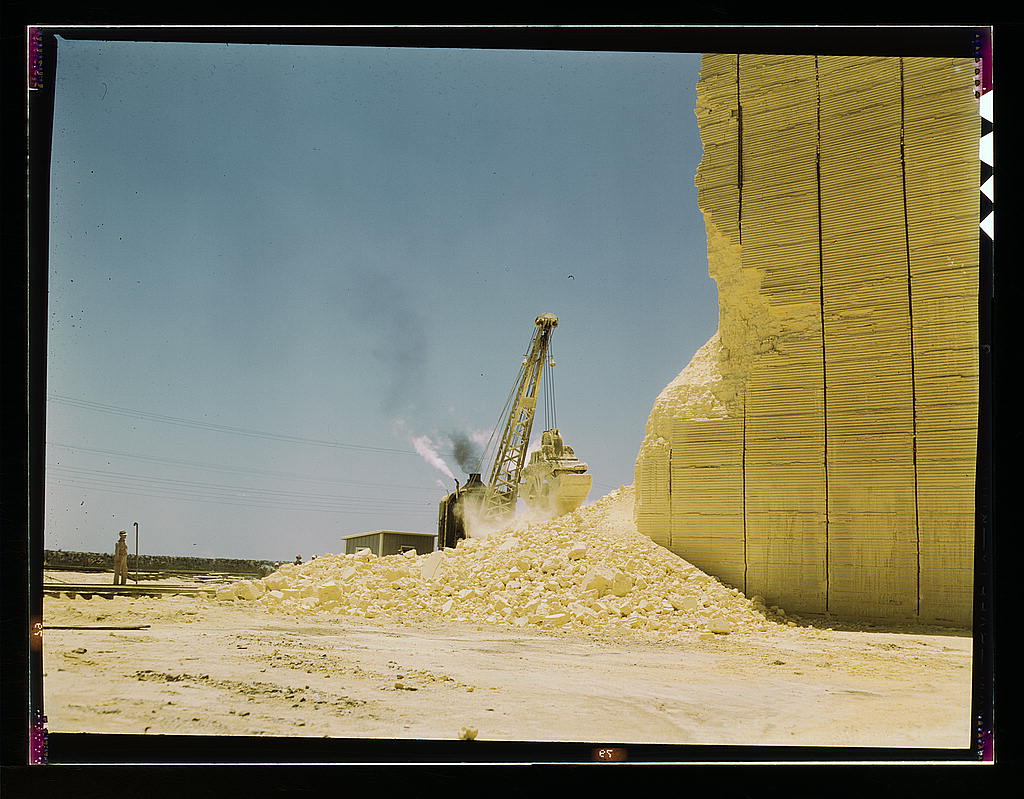 With the development of industrial production, it was reached the point (in 1834) that a census counted more than 200 operating mines (2) whose product was shipped to all Europe and even to USA. In 1827 extensive subterranean sulfur veins were discovered in Louisiana and Texas, but the traditional mining exploitation was not possible due to the superficial ground layer made of mobile sand. It was then invented a completely new method to exploit them, the Frasch process, which permitted the extraction of the mineral from the deepest layers through injection of heated water into the subsoil. Through this method having high performance, the American sulfur became more competitive conquering the markets very soon.
Sulfur is mostly spread in nature linked to other elements in the sulfides (e.g. the pyrite is a iron sulfide) and in the sulfates (e.g. gypsum and alabaster are calcium sulfates). At native state it is found near hot springs and volcanoes (by this the archaic name of brimstone, where brim is the edge of the volcano). Beyond the pyrite, among the minerals containing sulfur, there is the mercury (II) sulfide or cinnabar, lead (II) sulfide or galena, zinc and iron (II) sulfide or sphalerite and antimony sulfide or stibnite.
In small quantities it can be found in the carbon and in the crude oil too, from whose combustion it is transformed to sulfur dioxide which, in presence of oxygen and air humidity modifies itself into sulfuric acid determining acid rain falls.
Sulfur is eliminated from carburant because reduces the activity of the catalytic mufflers.
Sulfur extracted from the fossil combustibles represents a good percentage of the total sulfur production; also sulfur coming from the mines must be added to that one.
The method adopted for the extraction is named Frasch process and consists in pumping a mixture of compressed air and heated aqueous vapor into the sulfur deposit. The vapor liquefies the sulfur which is pushed up by the air pressure.
Through sulfuric acid, which is its main compound, sulfur is one of the most important elements to be used as raw material for the industry; having capital importance for practically every sector of the chemical industry. The production of sulfuric acid is the main use of sulfur and the consumption of sulfuric acid is often considered an index of the industrialization degree of a State.
The characteristic color of Io, a moon of Jupiter, is due to the presence of various forms of liquid, solid and gaseous sulfur. It is supposed that a dark area, near the lunar crater Aristarchus, can be a sulfur deposit. Sulfur has been found in many types of meteorites too.